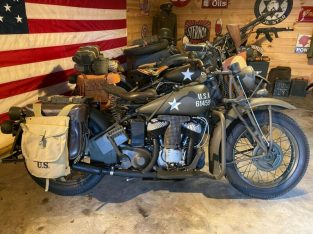 Click Here For More Photos & Details (message to seller or bid/buy) Disclaimer: This Auction/BuyNow is held by our partner Ebay. For further questions please contact original owner at Ebay.1941 Indian 741B “Army Scout” WW2 Motorcycle The Indian 741B ...

1941 Indian 741B “Army Scout” WW2 Motorcycle
The Indian 741B is the military variant of the Indian Thirty-Fifty. A total of 30,000 units were sold to the US Government and many were supplied to British and other allied forces with some being used by the US military as dispatch bikes. This bike was used in WW2 in the European theatre and was sold by  Pride & Clarke (the former motorcycle retail empire, that was located in south London from 1920 until 1979)  to a civilian buyer after the war in 1946 and first registered in Kent in March 1947. I have the original registration document and petrol ration card showing the registration of the bike, the movement of the owner and his purchase of petrol during the post-war years.
Between 1947 and 1951, the owner hand painted the bike black and rode it apparently with little consideration for maintenance and seized the engine due to lack of engine oil. The bike then spent the next 50+ years in a barn and was rescued in a poor state for restoration by an enthusiast (the only other registered keeper) ten years ago. He rebuilt the engine and upgraded it from 500cc to 750cc and reassembled the bike as it was for his private collection. I bought the bike last year and I have completed a detailed and total restoration since then and it has been on display in my private collection. He and I have spent many thousands of £’s on returning this bike to its former glory.
The US Government bought fewer than 30,000 of these bikes from Indian and only a handful remain. By contrast, Harley-Davidson produced 70,000 WLA’s and many remain in military and civilianised spec. This is a rare bike, one comes up for sale a year in Europe at best. Most are poor quality restorations. This bike features: Original front and rear sub frames numbered 741-4545 Original matching engine number GDA-4545 The engine has undergone a rebore and the flywheels, pistons and conrods have been upgraded to give a full 45 cu in / 750cc New points and timing has been correctly set off the front cylinder head-off Original skid plate (complete with battle scars) Original girder forks Original wheels Original  engine crash bar Original rear luggage rack and saddle bag mounts Original rear wheel stand Original tanks compete with military information plate on left tank and original caps with leather seals Original fuel taps Original front and rear fenders (split rear) Original, rebuilt 3 speed manual kick start transmission New full set of clutch plates from  Jerry  Greer Original kick start lever and pedal Original hand gear shift lever and knob Original handle bars Original corkscrew throttle and timing controls, hand switches and hand brake lever Original headlight Original front and rear blackout lights Original early drum-style Houde air cleaner correctly labelled Original Linkert 741 carburettor with 750cc  venturi fitted Original brown leather saddle, T-bar and springs Original drum brakes (with relined shoes) Original speedometer Original rear view  mirror and mount with replacement lens Original steering damper with replacement leather washers Original ignition switch Original Autolite generator and  distributor Original registration document Original workshop manual Painted in correct US olive drab paint with matt  lacquer US star is painted to left and right tanks and the bike has a correct military registration marking painted on the rear fender and right tank Period-correct unit markings are painted on the front fender designating the bike as the 3rd HQ vehicle for the 2nd Ranger Infantry Battalion of the 75th Regiment of the US Army. A unit that participated in the Normandy landings Pair of high-quality leather saddle bags which match the seat Lockable tool box with a pair of keys Radio suppression cover over distributor (these are usually missing) New tyres New ( exact replica) wiring harness New ignition coil and leads New spark plugs Refurbished clutch, brake and throttle cables (cloth covered) New battery (encased in a battery box which is identical to period Indian battery) Any much, much more I have sourced replacement parts where the originals were too badly corroded or unusable from around the globe from New Zealand to California. I have not fitted a front tool box or Thomson scabbard because these  were  never actually fitted but I  have one of each if you want to add them.  As you can see from the photos, the bike is immaculate.
Importantly, the 741 was a sluggish bike – good for 40mph at best. This bike has had a proper 750cc upgrade and will keep up with a WLA all day now. I made sure that I upgraded the Linkert carb to supply sufficient fuel by upgrading to a wider venturi. The engine has excellent compression and turns as it should on a kick.
Since restoration, I have not fuelled it, put oil in it, started it or ridden it. You can have that pleasure. All of the  electrical  components function correctly and the generator has been tested at a steady 6-7V output. It is a perfect museum piece. If you want to ride it (brave as it has a left-hand throttle, right-hand timing adjuster, suicide foot clutch and right-side hand shift) then you will need to recommission the bike for road use, put a licence plate on it and give it a shake-down. But that should not be a problem for an  enthusiast – I will leave that to you. I have lot’s and lot’s of photos of the restoration – from basket-case to perfection and plenty of  paperwork.
I have to sell this beautiful bike to buy a Zundapp K750 as I have always wanted one and have found a patient seller in Eastern Europe. So I am looking to pass the baton onto another keen enthusiast for allied WW2 motorcycles. If you want a “twist-and-go” restoration for re-enactment or shows, look elsewhere, this is strictly for connoisseurs. You won’t find one better than this anywhere in Europe.
Payment by bank transfer only and buyer collects. For sale elsewhere so may be withdrawn from sale at any time. 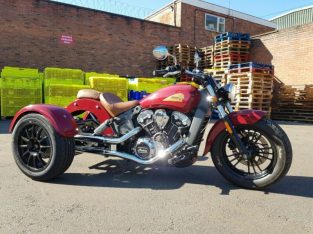 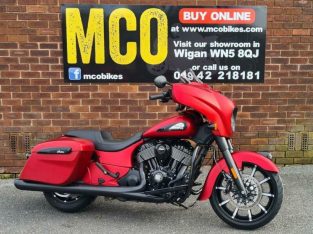 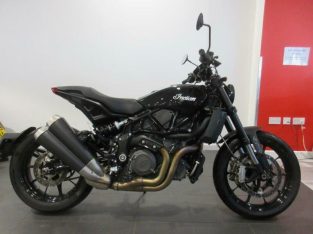 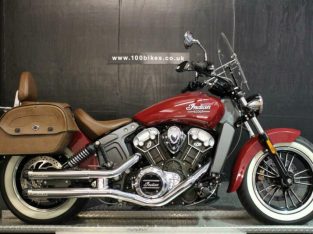 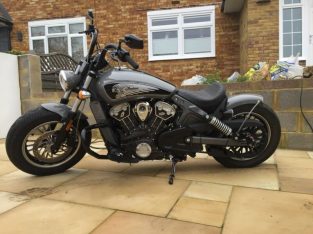