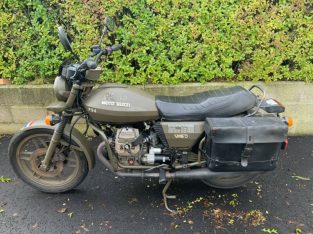 Lovely wee bike. I have other bikes and I am not using this bike at all so best let someone else get the use of it.
New parts fitted as follows:
Motorbatt Battery
Starter motor (not a bosch)
Right hand switch gear+twist grip
carburettor Jets are all new
Rear Blackout lights (not currently fitted to bike but in spare included in listing)
Piston Rings
Rear tyre was new when i bought the bike, only done 400 miles total so not much wear
The bike is essentially a V50II with different gear ratios and slightly lower compression (for using the kick starter) also has slightly different carbs fitted to the standard V50II.  Many V50II parts will fit as standard. Brake on handle bar is a proper master cylinder on handle bar disk brake, not a cable operated one on the V50II.
The only rust on the bike is on the down pipes and cross pipe on the exhaust, surface rusted with age but all solid and no weak points, exhaust system is still the original factory Moto Guzzi sysem painted black as standard for army.  At some point i am guessing when it was still in the army many parts of the chassis and fuse boxes (theres 2) were well greased, i have never cleaned it all off so the metal brake hoses for the linked brake and the fuse boxes are greased to keep out moisture, a bit messy but has worked a charm, no rust or moisture damage.  Fuel tank is clean inside.  Rear shocks are originals in great working order, no leaks
When I first bought the bike the engine and gearbox were leaking oil so i replaced all seals, gaskets and the piston rings were done while engine was apart.  Now oil tight and running good.  Kick starter works great.  Shaft drive all great working order and bevel unit oil tight.
There is remnants of Gorilla tape below the ignition switch, it was to cover a military siren switch when it was still in service, this system was removed by the army before it was retired and unfortunately the used gorilla tape to cover it as shown in pictures,
Hazard lights, rear fog light and indicator siren all work.
Bike was imported to UK in 2006 and was part of a military Museum collection before the museum closed and it was sold off in 2016.  I purchased the bike January 2017 from the first owner who registered the bike in late 2016.
All paperwork from Import and 1st registration are included as are receipts of parts purchased.
Spares included are :
1 carburettor (left side)
1 float needle and jet
Oil return hose
1 top end gasket set (1 cylinders worth)
Oil Seals for Bevel Unit (unused in engine overhaul)
2 Workshop manuals
Guzziology book
Also included are 2 1980’s Army complete unused Medical kits in metal containers that came with bike when i bought it and very unusual to find complete.  some of the bandages are dated 2012 so had been replaced at some point, others are dated 1986.
Hard Saddle bags are a good condition, some marks and a small scuffs, previous owner painted out dutch badge on rear right side with green paint.
Part of the original tool kit is included and 2 tools are still sealed never used. also a box of spare light bulbs.
Bike is 35 years old and not a restored bike but is a great original example with a lot of potential for a military vehicle fan to restore to original condition.  Only non guzzi original part on the bike is the new starter, I still have the original Starter motor if its wanted, it had jammed and in need of a complete refurbishment, was quicker to replace the unit.
I am located just outside Elgin in Morayshire,  North Eastern Scotland.  I had used 2 wheel trans https://www.2wheeltrans.co.uk to have the bike delivered when I bought it and they were excellent, they charge around £240 to ship across the UK,
Any questions or further pictures required please contact me.
Click Here For More Photos & Details (message to seller or bid/buy) 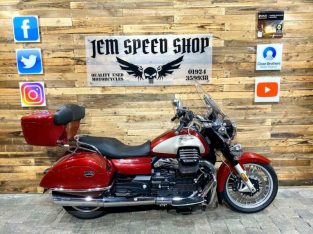 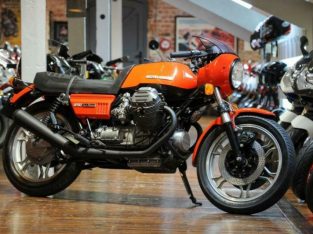 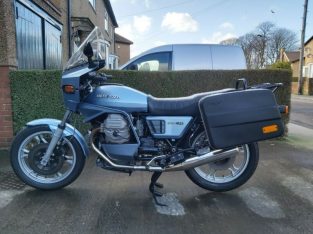 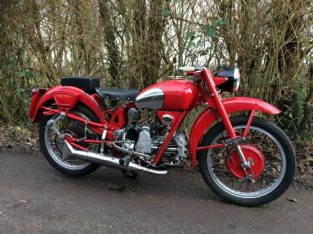 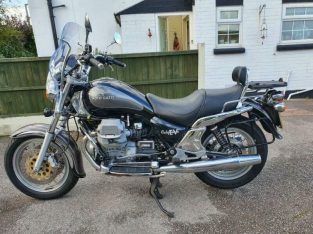