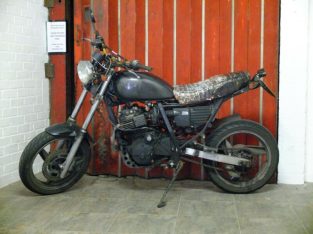 Click Here For More Photos & Details (message to seller or bid/buy) Disclaimer: This Auction/BuyNow is held by our partner Ebay. For further questions please contact original owner at Ebay.This is unique, cool and huge fun. It started out as a Honda ...

This is unique, cool and huge fun. It started out as a Honda XL600LM (made 1985, imported 1998) but some mystery engineering genius has rebuilt it into a supermoto-style custom.
It’s got Kawasaki ER500 wheels, a classic-style tank (maybe Kawasaki Z?), redone lights, mudguards, side panel and exhaust. It’s all been done very well, with a neat billet ally mounting plate for the front brake, a properly working digital speedo/revcounter and idiot lights, Renthal bars, a classic front headlamp and rear light and loads of other nice details. It’s electric or kick start, by the way, and has LED bulbs at both ends and a fairly new gel battery.
It’s got the legendary punchy, tough Honda 600 four-valve single engine, as used on absolutely everything for years, and really grunts its way out of corners. The handling’s excellent, and the brakes are good and sharp. It’s superb round town or on twisty country roads, but will keep up with 70+ mph traffic on main roads if you don’t mind it getting a little blowy.
It’s got an MoT until November 2021, and will come complete with the V5, MoTs, plenty of bills for servicing and parts, and of course a Haynes manual.
But now for the bad bits. Which really aren’t that bad, but I’ve just got a new job and I can’t spare any time to sort the bike out. I’m going to have to get something boring and modern instead (sob). There’s a knock from the top end of the engine, which is loudest when you first start it up then calms down after a mile or two. I’ve been told that it could be a worn cam follower, or maybe that the cams need new bushes. Shouldn’t be a huge job to sort out, but I just haven’t got the time. It’s always been fiercely reliable, though, despite the odd rattle. The whole bike’s scruffy. It needs a deep clean, then a good going over to replace bits of insulating tape or ratty zip-ties holding things together; the back light’s cracked, one of the indicators is taped up, etc etc. I’ve been meaning to get round to it, but… (see excuse above).Most of it could do with a fresh coat of paint. The exhaust needs rubbing down and painting with proper heatproof paint – or replacing if you want. The tank’s chipped here and there, and the front mudguard and side panel – yes, there’s only one – would benefit from a repaint too. I had ideas about redoing it in a ’60s Honda street scrambler scheme, with a bit of metalflake and retro badges, but… (see excuse above).The seats cover’s flaky and worn, although very comfy. Some people might like it that way; it does look pretty cool, though I did quite fancy getting it recovered… (see excuse above).There’s a very small oil leak from the front of the engine somewhere. It drips literally one drop per 20-mile journey, but I thought I’d mention it.I think that’s about it. The bike’s in Bethnal Green, East London if you want to have a look. And of course do ask any questions you think of.
I’m going to start it at a frankly silly £600 (£1 per cc), which is an absolute steal, as big singles are starting to become collectible, but I need it out of my hall so I can make room for something much duller. Good luck! 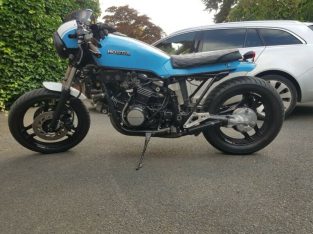 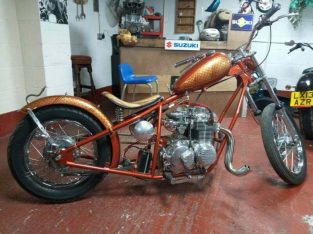 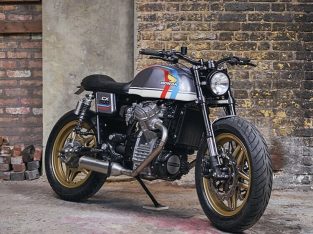 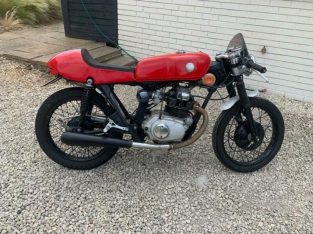