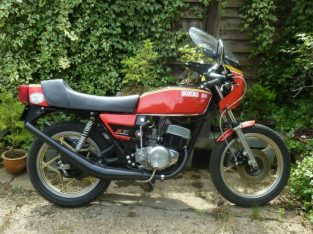 Suzuki gt250 X7 1979 Barry Sheene tribute UK bike first reg July 79, only 15914 miles in Texaco Heron colours as used on Barry Sheene’s race bikes in 1979 with signature and #7 on tank. Last MOT expired August 2018 with no advisories and now 40 years old, so mot and tax free.
This bike is in excellent condition, the last two photos are from the original builder showing complete rebuild from powder coated frame up.
As a teenager back in the 70’s and early 80’s THE BIKE to be seen on was the Suzuki X7 – the red ones were the fastest, the blue ones were blue and nobody wanted a white one.
Barry Sheene was world champion and our idol and he was the advertising face of the X7.
This was the first 100mph sports production 250. You could ride a 250cc with ‘L’ plates back then, but the X7’s 100mph that sparked the interest of every would be teenage hooligan, also caught the eyes of the law and brought about the 125cc limit for learners in 1983.
6 speed, weighing only 128kg, 28.5bhp and 101mph, it easily beat the RD250’s and KH250’s and most of the 400cc bikes of the day!
Nimble handling with amazing acceleration, fun to ride and the greatest grin factor!
Not content with the awesome power and speed of the standard model, a range of period modifications were available and motorcycle magazines showed how to ‘tweek’ your X7 to get the best out of your bike – the Barry Sheene feeling!
This bike sports the go faster mods of the day – micron expansion pipes, micron fork brace, ace bars, race seat and period half fairing, along with larger carb jets, racing reeds and port polishing.
At 6000rpm the powerband kicks in like the proverbial kick in the pants, this bike is a true icon of the seventies.
I’ve owned this bike over 6 years and have taken her to a couple of local shows where she has been greatly received. I am regretfully selling as it has become time to reduce my collection and unfair for her not to be shown/ridden/enjoyed. Any questions welcome 01780720466 and please come and view, (retired so home any day) we are near Stamford Lincolnshire PE9. Cash on collection only, no paypal.
Click Here For More Photos & Details (message to seller or bid/buy) 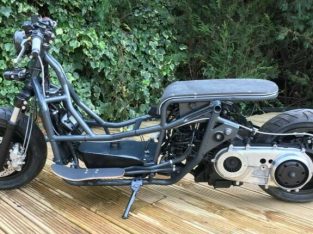 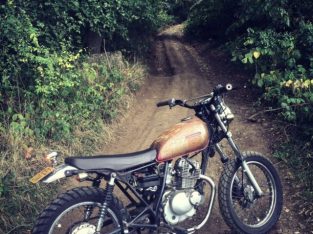 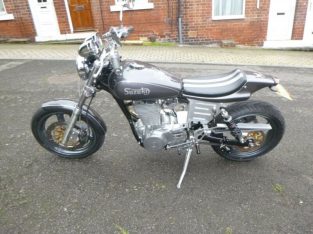